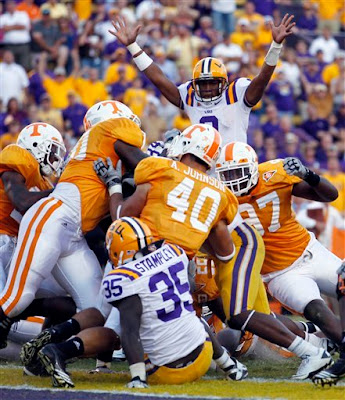 L.S.U. tried to give Tennessee a victory Saturday afternoon. Tennessee wouldn't take it. In as bazaar a finish as you are likely to see in college football, L.S.U was given a second chance to literally pull victory from the jaws of defeat. After being stopped on the one yard line by the Volunteer defense while trailing 14-10, L.S.U.'s center T-Bob Hebert snapped the ball over quarterback Jordan Jefferson's head on what everyone thought was the final play of the game. Tennessee wins, and Derek Dooley tastes his first SEC victory, right? Only in your dreams, Vol fans. The men in Orange were caught with 13 men on the field and the Bengal Tigers are given a "do-over" from the 1/2 yard line with no time left on the game clock. 'Lucky Les' Miles continues his "Magical Mystery Tour" through the L.S.U. schedule, and finds his squad somehow at 5-0. Meanwhile, Dooley takes his team to his Dad's old stomping grounds next Saturday as he travels "Between the Hedges" to face a hapless Georgia Bulldog squad. One thing is for sure, after the Vols leave Athens, either Mark Richt or Dooley will have garnered his first conference win of the season. Now isn't that a heck of a storyline for those two once proud southern football programs?
Posted by Sports Dawg at 9:28 AM