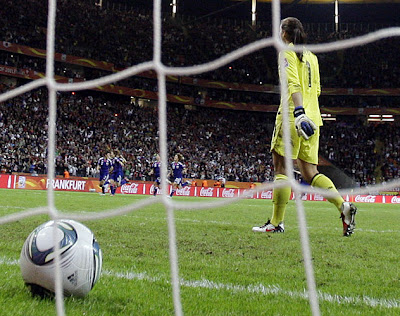 The United States women failed to close out a Japan team that looked outmatched for much of the World Cup final. It almost seemed as if the U.S. was playing not to loose, more so than playing to win. There is a big difference you know. There were scoring chances missed by our American team, and the defense seemed to almost totally collapse on Japan's first goal. But then again, that is soccer. It is a game than can sometimes lull you to sleep, then keep you on the edge of your seat without a moments notice. Anything can happen in soccer, as is true with most sports. Anything did happen Sunday. Japan upset the United States to win the World Cup. They were a team of destiny, and they did do a better job of seizing the moment. But not to worry, where there's Hope (Solo), there's U.S. soccer!
Posted by Sports Dawg at 10:53 AM