Auburn Demolished by Georgia: No War Left in That Eagle... 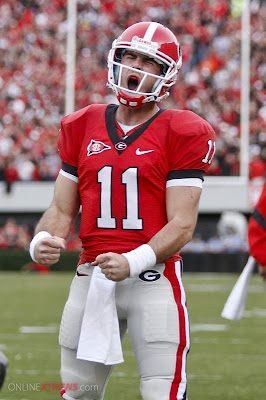 Offense, defense, special teams, coaching. You name an aspect of a football game and Georgia totally dominated it in their 45-7 rout of Auburn University. The Dawgs thrashed the Tigers as badly as they have been whipped in quite some time. Auburn was completely routed and run out of town on a rail. They had no paid junior college transfers to bail them out this year, but it would not have mattered anyway. They ran into a runaway train that was the Georgia Bulldog football team, and they got their rears handed to them on a platter. I personally have been waiting for Georgia to play a complete football game so that we could know just how good this team could be. Now that they have, I'm convinced they are an impressive group. They have come a very long way since the debacle that was the 2010 season. They deserve to soak up this win and enjoy the fruits of their labor. But only for one more day. There is still much work to do this season. Just like Tom Cruise said in 'Top Gun', "but it's looking good so far"!
Posted by Sports Dawg at 9:17 PM