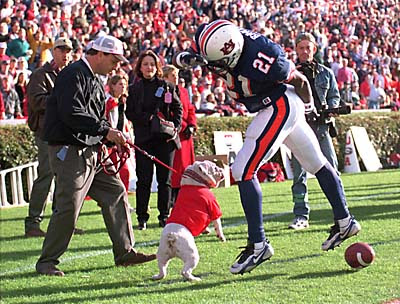 Georgia -vs- Auburn, "The South's Oldest Rivalry", resumes again this Saturday. This edition will be number 115, with Auburn currently holding a slight edge over the Dawgs at 54-52-8. Georgia does enjoy a slim lead in points scored at 1809 to 1771, testifying to the overall closeness of the series. The rivalry has had so many games that were meaningful in the conference picture, not to mention several significant outcomes regarding the national polls. This year is no different with respect to the former, with the SEC East title at stake for the hosting Bulldogs. Although the series has always been looked on as a "friendly rivalry", that all changed last year due mainly to the cheap shots committed by AU's imported nose guard Nick Fairley. Fairley's two very late and very cheap shots to UGA's quarterback Aaron Murray were at least successful in removing the 'friendly' moniker from the description of this annual battle. As you can plainly see in the 1996 photo above, the Georgia-Auburn game has never been friendly as far as Uga is concerned. Like the old saying goes, "track 'em Dawgs, just like beagles. To hell with you, you damn War Eagle"!