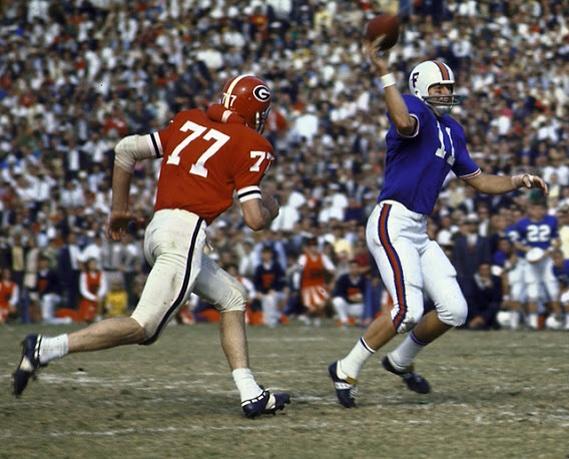 It's Georgia-Florida week so a great flashback of this series would be to recall Bill Stanfill's great game against the Gators in 1966. Stanfill sacked eventual Heisman Trophy winner Steve Spurrier twice, and hammered him after passes often that day in the Dawgs 27-10 victory in Jacksonville. The sophomore from Cairo,Georgia helped the Bulldogs deny Florida their first ever SEC Championship, and that was after the Gators led 10-3 at half. It is this game in particular that many Georgia fans believe led to Spurrier's tremendous hatred of the Bulldogs during his coaching career.
The irony of all of Stanfill's heroics that day was that he was not even expected to play. He suffered a neck injury during practice that week, but still traveled with the team to Jacksonville. The story goes that Coach Vince Dooley and the team doctor paid a visit to his hotel room the night before the game, where the doctor administered a cortisone injection to his neck. Saturday morning the neck was fine, but Spurrier's pains were just about to begin.
In the 1968 Georgia-Florida game Stanfill again had another superlative effort as the Dawgs smashed the Gators 51-0. That Saturday he even finished the game as Georgia's quarterback on the last series of the lopsided victory. Bill Stanfill, always and forever, a Damn Good Dawg!