Nate McLouth: Is Time On Your Side? 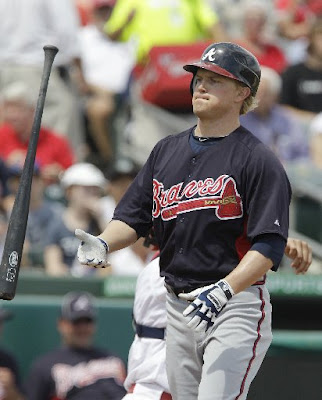 Nate McLouth had a lousy 2010 season, and that assessment is being extremely gentle. However, to his credit, McLouth worked hard during the off-season, had a successful "bounce back" spring campaign and emerged as the Braves starting center fielder. Just another "feel good" story, right? Huh, not quite yet. Now that the official 2011 campaign has begun the speedy center fielder is back to his bad habits once again. He is 3 for 16, with five strikeouts and one walk. Not very good numbers for your hitter occupying the number two hole, again being very gentle here. I realize that one week does not a season make, but how much time will new manager Fredi Gonzalez give his center fielder to get his offensive numbers turned around? I would assume far less than former skipper Bobby Cox would have. I want Nate Mclouth to succeed because I want the Atlanta Braves to succeed. In order for the team to flourish, they will have to have a center fielder playing at the top of his game. At least closer to the top than the bottom.
Posted by Sports Dawg at 11:17 AM