Georgia -vs- Vanderbilt: Can't We All Just Get Along... 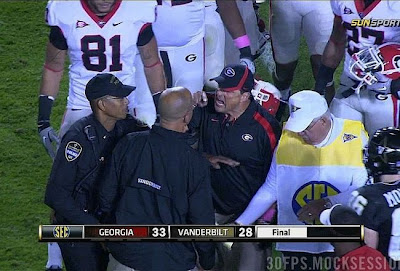 He said, we said, they said, yada, yada, yada. A couple of football coaches yell at each other and probably represent their respective institutions in a less than flattering manner. Not the best of situations but not all that uncommon in the football arena. I'm not saying it's right or wrong, just that it is. Vanderbilt believes Georgia's Todd Grantham went berserk for no good reason. Georgia believes Grantham was provoked. It won't matter for long who thinks what, because now all that matters is what the SEC Commissioner's office thinks. That's where this incident is headed now. On the UGA front, Grantham has had to meet with head coach Mark Richt on Sunday and athletic director Greg McGarity today regarding his behavior after Saturday night's hard fought Georgia victory (or hard fought Vandy loss, depending on your perspective). My hope here is that he does not have to meet face-to-face with Commissioner Mike Slive, nor have to be on the receiving end of a hefty league office punishment. I for one don't want to face Florida without defensive coordinator who was serving a one-game suspension.
Posted by Sports Dawg at 2:55 PM