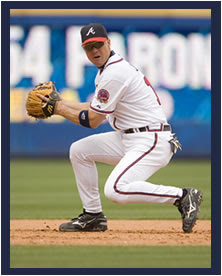 As MLB prepares to open its 2008 campaign, and being the Southern Atlanta Braves Fan that I am, I thought it only right to relegate this space to #10, Chipper Jones. Chip is one of those "non-flashy" old school ballplayers who just goes about his business putting up steady, above average numbers each season (and he's pretty solid with the leather also). The Braves are simply not as good when he is out of the line-up. And that brings us to the only rap on Chip: Injury Prone! I suppose to a degree that's justified, but you have to admit, the guy plays hard and some of his injuries have been a little on the "freakish" side. Nevertheless, Chipper is still closing in on Hall of Fame career numbers (he even admits the numbers aren't there YET), and here's hoping he wears that #10 Braves jersey several more years! When the time does come for him to hang 'em up, I really think we'll look back and realize we didn't appreciate him enough. As Bobby Cox would say, "Atta Boy, Chip!).
Posted by Sports Dawg at 5:04 PM