Jeff Francoeur: A Brave No More 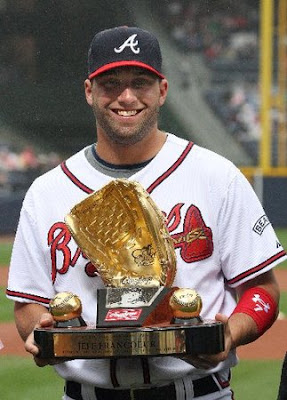 The Atlanta Braves did not trade-up when they dealt Jeff Francoeur to the New York Mets today. They did not trade-out either. In other words, they traded for a player of equal or lesser value, and they did so within their own division. Hopefully, that part of the deal won't come back to haunt the Braves. I would have preferred seeing him go to the American League. But I believe the trade will be good for Francoeur. The hometown boy needed to get out of the hometown. Enough would never have been enough in Atlanta for him, and he was far from the lofty expectations placed on him early in his career. Dubbed "The Natural" by Sports Illustrated, he looked anything but most of the time. He was rushed into the majors, and exploded on the scene once he got there. It really would have been hard for him to go up from there. And he didn't. We forget age-wise, his high school class is just exiting college. He does, at least, have youth on his side. Will he ever be all that was expected of him? Only time will tell. He still has not proved that he can make the necessary adjustments at the plate to be a consistent major league hitter. He'll need to amp up that learning curve. Fans of New York teams are not known for their patience. It could get ugly in the Big Apple.