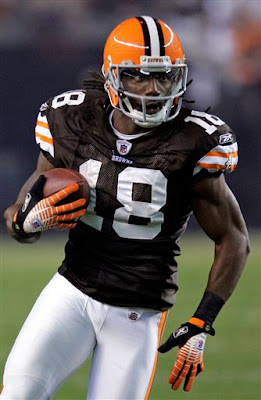 Donte' Stallworth has been released from jail after serving a whopping 24 days for DUI manslaughter. How do you only get a 30 day sentence and serve 24 of them for manslaughter?
I'll admit, the lifetime ban from driving is pretty stiff, but not so bad when compared to 15 years in prison. I suppose that the 'financial settlement' with the victim's family was the determining factor in the entire deal. But what the heck, dollars rule over death any time. Right? I guess it beats rock, scissors, paper. What do you have to add O.J.? Perhaps Michael Vick should have sponsored 'men' fights instead of canines. I'm just saying...
Posted by Sports Dawg at 4:13 PM