Yes Tom, It Would've Been A Hell of A Story 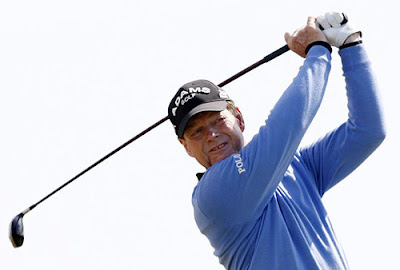 Stewart Cink won the 138th British Open Championship. With no offense to the deserving Cink, the bigger story was actually that Tom Watson almost won the Claret Jug for the sixth time. At 59 years of age, the venerable Watson held the championship in his hand until his eight iron approach at the 18th hole bounded over the green. Any avid follower of the days play from Turnberry knew an up-and-down from that location was anything but a sure bet. Why could he have not gone with the nine? He said he thought about it. Or did it matter? Had the golfing Gods run out of graciousness to one Mr. Watson on this 72nd hole? He had played marvelously, regardless of his age. He wanted to win and we wanted him to win. We're happy for Cink, but devastated for Watson. He fought, he competed , he excelled, he came oh so close, and in the end he hurt. And we hurt with him. But we thank him for his excellence, his class, his competitiveness, his will to win, his dignity in defeat. Keep teeing it up Tom Watson. We're not quite ready to thank you for the memories just yet.