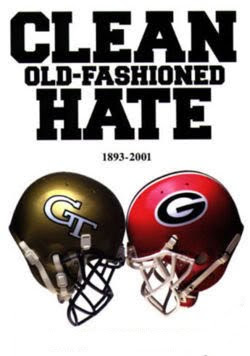 Initial talks have begun regarding the possibility of Georgia and Georgia Tech opening the 2011 season as opposed to closing it, as is the norm. The Atlanta Sports Counsel has proposed that the two teams oppose each other in that year's Chick-fil-A Kickoff Game. The 2011 game between the two interstate rivals is slated to be played at Bobby Dodd Stadium in Atlanta as the last regular season game for both squads. To further complicate the matter, Georgia Tech says the only way they will consider the move is for Georgia to agree to play the 2012 contest, scheduled for Sanford Stadium in Athens, in Atlanta as well. Are you kidding me? Leave the rivalry fields alone, as well as the alternating stadium rotation. Keep the games at the end of the regular season on alternating campuses. End of subject. Case closed. Wreck Tech!
Posted by Sports Dawg at 1:24 PM