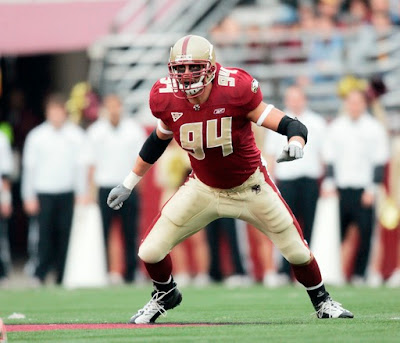 In May, Boston College linebacker Mark Herzlich was diagnosed with Ewing's Sarcoma, a rare form of bone cancer. Today, the 2008 ACC Defensive Player of the Year is 99% cancer free. The only reason his doctors won't say 100 % free is because a biopsy hasn't been done. His name, which means 'full of heart', says all you need to know about Mark Herzlich. He's battled his toughest enemy to date, cancer, just as hard or harder than he has battled his adversaries on the football field. Although he has been unable to play this year, he has been back with his teammates on the field and in the locker room. Don't think for one second he has given up on ever playing football again. That is definitely was of his main goals, and he will return to workouts this fall. He admits, "it's really up to God and medicine how everything works out". Here's hoping it all works out to the advantage of Mark Herzlich!