Would You Play Tim Tebow Against LSU? 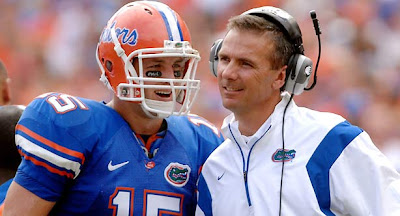 Tim Tebow is almost two weeks into his recovery from a concussion he suffered in Lexington against Kentucky (some prefer to say Kenyucky). That's 'concussion', not sprained ankle, just for the record. As you know, one is much more serious than the other. Florida faces a very average LSU squad in Baton Rouge this Saturday. As you recall, the Tigers narrowly defeated an even more average Georgia Bulldog team last Saturday, while Florida had its feet kicked up enjoying an open date. As of yesterday, Tebow had been cleared to practice, but not to play yet. Tim Tebow wants to play, his teammates want him to play, and the entire Gator Nation wants him to play. But should he play? Is he far enough removed from the date of the trauma to risk another blow to the head? Will Urban Meyer play him if the medical staff clears him to play? Florida probably won't need #15 to beat LSU, but on the other hand they probably could run the remainder of their schedule without him. However, things would be a little more 'dicier' for the Gators if he weren't in the lineup. Whether you like him or not, he is arguably the best player in college football. With all of that said, I think Meyer plays him Saturday if the doctors give the O.K., but I think he plays him a little differently than before. Maybe his passes will be more of the quick release variety, without the deep drop waiting for receivers to come open. I would also expect Tebow to set a personal record for hand offs to his tailbacks. For what it's worth (not much!), I would sit him out of this one. I'd give him one more week to recover without those LSU linebackers and defensive ends head-hunting him. Even Dirty Harry knew his own limitations!