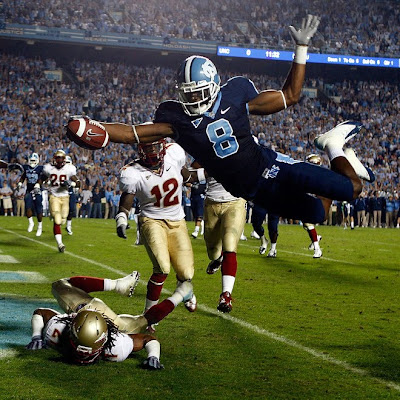 North Carolina was all spit-shined for the big dance. First Thursday night national spotlight game against a once powerful foe, all navy blue uniforms for the first time ever, and former Tarheel stars Lawrence Taylor and Julius Peppers on hand for support. All the pieces were in place, especially after jumping out to a two-digit lead over Florida State. But the slipper came off before the midnight hour, and all of the air was let out of the UNC balloon. Final Score: Seminoles 30 - Tarheels 27. This on a night that before the season started was targeted to be a showcase event for the supposedly revamped, revitalized, and rebuilt Tarheel football program. But conversely, it was a night where Butch Davis' program definitely took a giant step backwards. North Carolina does not have a single ACC victory this year, but somehow is 4-3 on the season. Tarheel gridiron fans now are faced with the very real possibility that the rebuilding process hasn't even begun, or that it began and fizzled out quickly. At any rate, North Carolina will remain a "basketball school" for a lot longer.