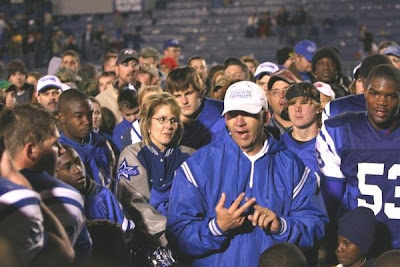 The Central Georgia area suffered big loss on Sunday. We lost a dynamic man by the name of Bill Bonds. Although he was a football coach "by calling", he could have been rightfully addressed as a senator: the Honorable Bill Bonds. For he truly was a man of honor. A man of integrity. A man of decency. A great husband. A tremendous father. A loyal friend. A dynamic Christian witness. All of the "old school" values that seem to be missing a lot these days, Bill Bonds possessed them all and exuded them all every day of his 49 years. He was the kind of person who made you feel good just being around him. He seemed to make everyone around him "better". If you were fortunate enough to call Bill Bonds your friend, you were extremely blessed for having your path cross with his. When we lose a coach, especially one of the really "good guys" like Bill, I always think about the huge number of lives that have been touched in a positive way by such a man. The number in this case is staggering, because he touched everyone he came in contact with in a positive way. He fought cancer so gallantly for ten years. A fight he waged with no complaints and no regrets. Cancer has had many worthy opponents, but perhaps not so many adversaries as one Bill Bonds. I will never give cancer credit for defeating him, because cancer never came close to touching the heart and soul of Bill Bonds. Cancer never would have been able to claim the fiber of the man. The essence of the man. The heart of the man. That will always be Bill Bonds. Godspeed my friend, and thank you.