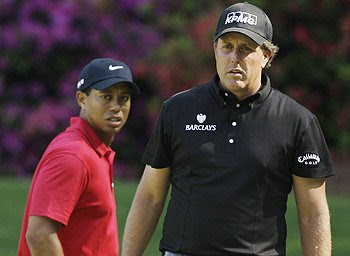 Do Tiger Woods and Phil Mickelson even like each other? CBS's David Feherty says Tiger and Phil don't really know each other. He says they are so competitive, that the competition shapes their relationship, if there even is a relationship. They didn't talk during their final round pairing at Augusta yesterday, but Feherty says Palmer and Nicklaus didn't say too much to each other either. They became friends after all the competitiveness. Kinda like Bird and Magic. I think the "mystique" of Tiger and Phil, or Tiger -vs- Phil, adds interest and intrigue to their tremendous talents, abilities, and battles on the course. And that intangible is going to surround them for many years to come. You know, if they put on a duel like they did Sunday afternoon, they might not like one another, but they sure will respect each other. Heck, we can live without the love.