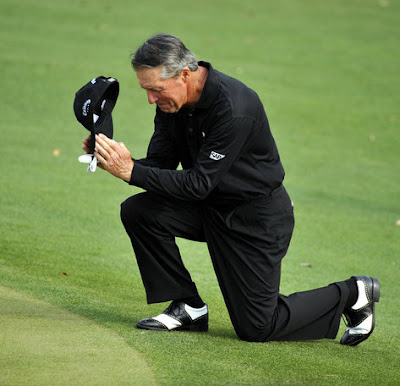 The 'Man in Black' has played in his final Masters. No more walks up the eighteenth fairway for the three-time champion. After a record 52 Thursday tee times at Augusta National, the 73 year old South African has chosen not to tee it up again at the hollowed grounds he holds so dear.
Gary Player did not make the cut at this year's Masters Tournament after shooting an 83 on Friday, but I assure you he will not be remembered for that score at Augusta. But he certainly was adulated for it. He received a standing ovation on every hole for both the Thursday and Friday rounds. A former champion held in the highest regard. A worldwide spokesman for not only the game of golf, but for human decency and dignity. Thank you Gary Player, for being a champion in every sense of the word. And more.
Posted by Sports Dawg at 7:50 AM