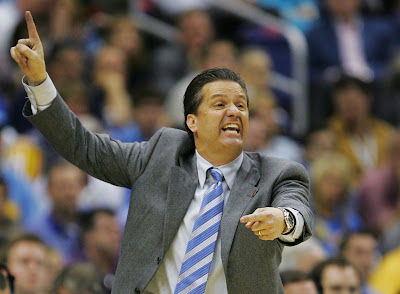 John Calipari is now the highest paid college coach in the country. His just completed deal with the University of Kentucky is an eight year $31.65 million record breaker. His guaranteed take for year number one is $3.7 million. To put this in its proper, or improper, perspective, Nick Saban's contract at Alabama is an eight year $31 million extravaganza. And he's a football coach in the South where football is king. But not at Kentucky. Calipari's deal almost triples the salary of head football coach, Rich Brooks (but in all fairness, Calipari can coach 'em up, whereas Brooks can't coach a lick!). But wait, there's more. Much, much more. The deal is laced with so many incentives it would make an auto executive envious (well, that might be overstating it a bit). Nevertheless, Mr. Calipari will receive two "late model" cars, plus mileage. His membership, fees, and dues at the country club of his choice will be paid by UK. He will have twenty prime season tickets to Wildcat home games in Rupp Arena, plus eight tickets for 'Cat football at Commonwealth Stadium (the incentive there is to for Calipari to see what his program can never be like). He will be paid bonuses for accomplishments such as winning the SEC and SEC Tournament (Wow!), reaching the NCAA "Sweet Sixteen", "Final Four", and for winning the National Championship. He will also be eligible for another bonus if his program achieves a 75% graduation rate among its players. Sweet, huh? I suppose I can understand the extra bucks for team achievements. However, isn't that why Kentucky is paying the gigantic salary for in the first place? And why the cars and country club sweeteners? With $3.7 mil rolling in his bank account, you'd think those incentives would be "chump change". But I guess if you're the one paying out the $3.7 , what's does a few more thousand matter. It's only the aforementioned "chump change". It's sick. The climate that surrounds the hiring of college coaches is sick; it's out of control. It 's great for the coach, of course. It is even justified by the university if the coach succeeds. If he wins. Because winning brings in the alumni dollars. That means a lot of dollars at a place like Kentucky (just basketball, Rich, just basketball). And when the winning comes, the contract is secondary at that point. What do you mean excessive, give him a raise by damn! Winning will be wonderful, basketball will be back, cash will still be king, and Kentucky will be cocky. The Wildcats will roar again. You go "Big Blue". But we're just talking about basketball , Rich.