Kenny Perry: You Would Have Looked Good in Green 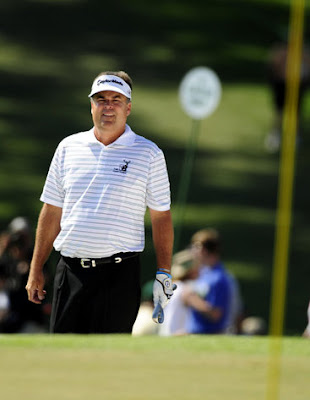 I'll go ahead and say it. I wanted Kenny Perry to win the Masters. But more than that, I didn't want him to lose it the way he did. If Phil, Tiger, or Chad had just run him down and passed him, that would have been o.k. But I certainly did not want to see him bogey the final two holes to lose it. But such is the final day at Augusta National, and such is the way of sports, and heck, such is the way of life. And I'll go ahead and say this: I wanted an American to win the Masters. Sorry, Angel. I read that you're a good guy, just not red, white, and blue enough for me. And you can't get much Red, White, and Blue'er than Kenny Perry. A Kentucky bluegrass kinda guy, with old school values which he refuses to compromise. He called himself "average" Sunday night, referring to that as opposed to "great". And further referring to the separation between the two as an explanation of why he didn't have what it takes to win the "Big One". He went sixteen consecutive holes on Sunday without making a bogey. But sixteen holes does not make a round of golf. You have to play all eighteen . Kenny Perry did, but just not well enough. But, not to worry, he'll play all eighteen many more times before he is finished with competitive golf. And we should all be glad when he does, because we need more guys like Perry. It is said we are the sum of all of our experiences. I'd say Kenny Perry totals up really well. Even without a green jacket.