Nothing Could Be Finer... 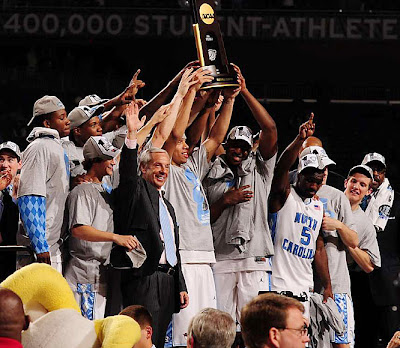 ...than to be in Carolina! Tyler Hansbrough came back for his senior year to get a ring. He now has that championship ring to validate a sensational college career. The college basketball world expected North Carolina to win the National Championship. Expect no more, just acknowledge. Creme de la creme, the best of the best and forget the rest. It's your time, so shine on 'Carolina! No one could overlook Ty Lawson, the finest point guard in all the land. He too had the option of the NBA last year. The same goes for the 'Player of the Tournament', Wayne Ellington. Is there a smoother, sweeter jump shot in the country? He has to be the epitome of a "pure shooter". And then there is senior forward Danny Green, opting for one more year in Chapel Hill in order to experience the exhilaration of a national title. What a compliment he is to Ellington's jumper; when those too are cooking, they will eat your lunch at the 3-point line. Now Junior Deon Thompson, who has improved and matured before our eyes this season, will be tempted to make an early exit to the next level. He is one who's game would be better served with another year of tough ACC conpetition. And just how good can freshman Ed Davis be? The sky is the limit, as they say. Don't forget Tyler Zeller, because he will be a force soon. Not to worry, the Tarheels will not be completely rebuilding, just partially reloading. They have a top ranked class coming in. However, I would not expect them back in the championship game this time next year. But that's O.K. for now. Roy has his second title, so number three can wait. After all, it's celebration time on Franklin Street. Savor the moment, and live out the dream. Party on 'Heels!