Chipper Jones: A Brave for Life 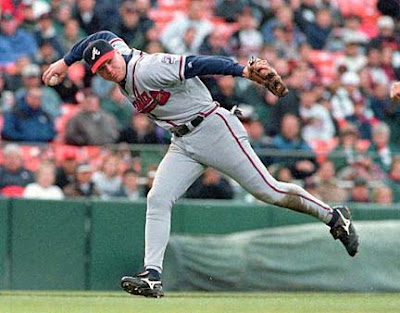 The Atlanta Braves and veteran third baseman Chipper Jones have agreed on a $42 million contract extension that will run through 2012 and keep "Hoss" a Brave for his entire career. There is also an option year for 2013. Chipper was the first overall selection in the 1990 draft by Atlanta, and he has been a Brave since then. Bobby Cox is the only major league manager he has ever had. Last season Jones hit 22 homers, and now stands at 408 for his career. If he could average just below 25 a year over the next four seasons, he could become the third switch hitter in major league history to hit 500 home runs (Mantle 536 and Murray 504). He is already the only switch hitter to have a career .300 average and at least 300 dingers. But more importantly, Chipper feels that the Braves' organization is on the way back with all the top young prospects in the fold, and he wants to be a part of being at the top again. As a Brave, of course.