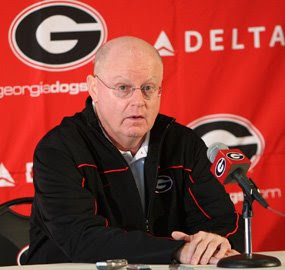 South Carolina handed Georgia its 10th straight defeat Saturday in Columbia. Not that there is any tradition with Bulldog hoops, but it is the longest losing streak for the Dawgs since 1972-73. They have yet to win an SEC contest, going 0-8 thus far this year. I witnessed LSU's dismantling of Georgia last Wednesday night in Athens. I have to admit, even as a die-hard Dawg, we have a terrible basketball team. It is really hard to believe these kids are on scholarship. I'm not trying to knock the kids personally, but is this the top level of talent that Dennis Felton could recruit to Georgia? No wonder he lost his job. And while we're mentioning coaches, interim head coach Pete Herrmann NEVER sat down the entire game. He barked out player instructions while standing up all night long. It might not hurt at this juncture to just try to coach 'em up in practice and then let 'em go play. Try that chair, Coach. Just don't get too comfortable. You won't be in it too much longer. And there are several more chairs on down that line that need to be refilled.