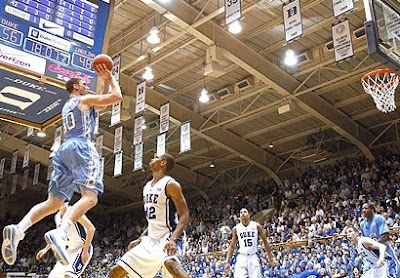 It's always easy for me to recall Joe Namath running off the field after his Super Bowl victory over the Baltimore Colts with that index finger waving over his head signaling that this New York Jets were indeed number 1. Now, how about Tyler Hansbrough running off Coach K Court in Cameron Indoor Stadium with four fingers waving over his head emphasising that his North Carolina Tar Heels had swept four games in a row from the Duke Blue Devils on their home floor? In one of the toughest arenas to play in college athletics, that is an unheard of accomplishment. And to hang "a hundred" on Duke while earning number four was just the proverbial icing on the cake. Especially when it was the first time in 26 years that an opposing team scored a hundred or more against Duke at home. Carolina seniors Hansbrough, Denny Green, and Bobby Frasor will always be able to say they never lost to Duke in Cameron. It would be difficult to imagine the magnitude of relief that the Duke team, as well as, the student body feels knowing they are through having to face the unconquerable Tyler Hansbrough in Cameron. Junior guard Ty Lawson was instrumental in the Tar Heel victory while scoring 25 points, 21 of which were registered in the 'Heels big turn-around second half. The "Cameron Crazies" are always roaring like lions before a game at Duke, but turn out to be timid little lambs after getting drubbed. Especially by their fiercest, most hated rival. It's hard to figure out which sound was the most deafening: The loud chants and taunts before the game or the utter silence after the final horn. You know what I mean?