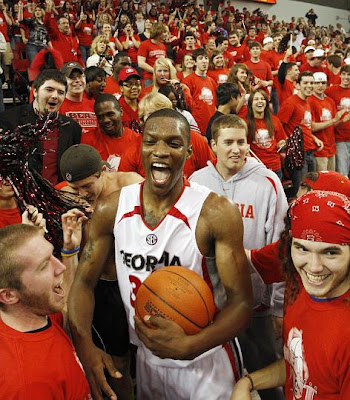 Georgia avoids going winless in the Southeastern Conference by upsetting Florida in Athens 86-84. Terrance Woodbury poured in a career high 32 points as the Hoop Dawgs snapped an eleven game losing streak. This streak was the Dawgs longest since 1975. Georgia played with an aggressiveness they had not shown very often this season, and they refused to fold down the stretch when Florida took a lead late in the game. The bulldogs lost at Tennessee Wednesday by a score of 79-48, but scored 54 points in the first half against the Gators. This early momentum was a result of "lights out" shooting that propelled Georgia to this much needed (how's that for an understatement?) late season victory. The Dawg's next opponent is Auburn in Athens Wednesday night.