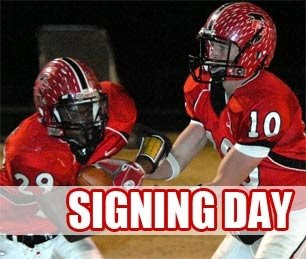 Tomorrow is National Signing Day for high school senior football players around the country. In the South, it's almost like the first of four seasons relating to football: National Signing Day, Spring Practice, Summer Camp, and the Regular Season. There are college football junkies who follow recruiting more than a year in advance (as an example, Georgia Tech just got their first verbal commitment for the 2010 class from a high school junior!). Much of the excitement of N.S.D. has diminished somewhat due to so many seniors committing early. However, the drama is still very thick this year with several highly ranked guys holding out to the last minute with three and four schools listed as their 'finalists'. Some of these guys have made a major spectacle with their announcements by disclosing their selections at all-star games, TV recruiting shows, and other off-campus venues. At times, this can add to an athletes already overblown ego. I have thought many times how insecure it must be as a college coach to know a certain part of your potential for success hinges upon what an eighteen year old tells you, and then what he actually does. They've been told for so long how great they are, and now they want to tell the college football world how great they are. The reality of it is, many times these kids never live up to he high expectations placed upon them. Nevertheless, they get to hold us hostage every year at this time. I know that in the morning, I will be watching the announcements of four or five guys key guys, hoping that at least two or three of them choose to wear the red and black of the Georgia Bulldogs. Tomorrow they get to talk the talk; after that we'll see who can walk the walk!