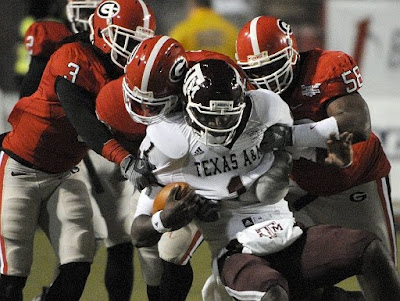 With graduate assistants serving as defensive coaches, fullbacks eventually pounding the rock as tailbacks, and an interim mascot on the sidelines, the Georgia Bulldogs thumped the Texas A & M Aggies 44-20 in the 2009 Independence Bowl. The defense played with heart and resiliency, the special teams were outstanding, and the offense perked somewhat in the second half. Georgia finally managed to play a team who could outmatch them in penalties, and be outmatched by them in turnover ratio. A team that could outdo them in the statistical aspect of the game, but be undone by the big play aspect of the game. I don't think we still know what this Georgia team is about, because I really don't think they could have defeated many teams other than A & M yesterday. We just won't get to see all of that talent performing as a "well oiled machine", if they were ever capable of that to begin with. The lack of fundamentals and discipline was still evident in Shreveport last night. Nevertheless, the Bulldogs scored their most points ever in a bowl game, and extended their streak on consecutive eight-win seasons to thirteen. The disappointing, roller coaster season has finally come to a close for Mark Richt's Bulldawgs. All that is left now is to name a new defensive coordinator. Let the speculation pick back up where it left off.
Posted by Sports Dawg at 4:44 PM