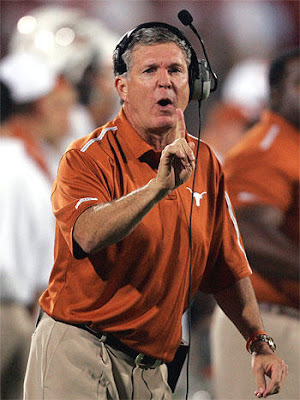 The University of Texas has made Mack Brown the first $5 million head coach. He was making $3 million per year, with a one time payment of $2 million coming in early 2010. Now Texas has decided to make that $2 million an annual allotment. Brown has gotta be lovin' this recession we're in. To go from $3 to $5 million is bigger than a "Blue Light Special". And just where does this leave 'coach-in-waiting' Will Muschamp? Texas has said they want Brown to remain the head coach of the Longhorns for as long as he wants. Brown has said he has no plans to vacate his post any time soon. He is only 58 years old. Muschamp has no deadline clause like Jimbo Fisher had at Florida State. Think of all the really good head coaching opportunities that can/will pass Muschamp by before Brown steps down. Can't you just see a cartoon depiction of Will taking over the head job looking like Father Time? But Texas football revenues are skyrocketing, and Mack Brown is raking in the returns. I would stay on for a very long time myself under these conditions. However, if I were defensive coordinator Will Muschamp, I would be open to some head coaching opportunities elsewhere. They'll be out there.
Posted by Sports Dawg at 8:48 AM