Willie Martinez: It Was His Time To Go... 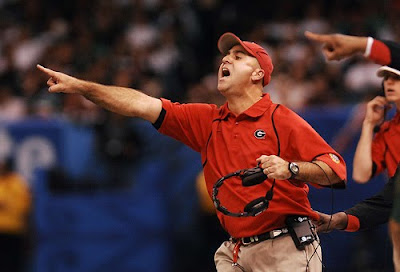 I never thought Mark Richt would fire Willie Martinez. I, like so many of us who make up the Georgia fan base, wondered if he could make such a tough call. Tough for him because he and Martinez were college roommates. Tough for him because they had been together at Georgia for nine years. Tough for him because they had been 'in the trenches' so many times together. Tough for him because Mark Richt is a very good man, and decisions like this make good men agonize over them. But we've found out that Richt will do what it takes for the good of his program. He can and will make the tough call. He isn't content with mediocrity. He definitely wants to turn his program around. Now he has taken the first step to make that happen. He's made good hires in the past, and he will make the right selection for his new defensive coordinator this time. And Willie Martinez will land on his feet as well. He is a good football coach in his own right. He will not stay unemployed very long. He's given the University of Georgia a big chunk of his life, and I for one, wish him well. But it was time for him to go. For the good of the Bulldog program.
Posted by Sports Dawg at 9:13 AM