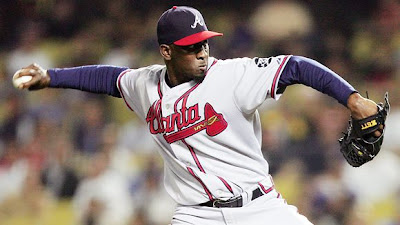 Just last week, the Braves signed a closer, Billy Wagner, and a set-up man, Takashi Saito for the 2010 season. These signings were necessary for Atlanta because relievers Rafael Soriano and Mike Gonzalez each were given arbitration offers after their contracts were not renewed by the club. Gonzalez rejected the Atlanta offer, as was expected. However, at literally the "Eleventh Hour" in which to decide, Soriano unexpectedly accepted his offer of $7+ million. Atlanta did not want Soriano for $7 million; they wanted the two compensatory draft picks they would have received from his new team. Now they will have to trade him outright to another club and continue their pursuit of a power hitting outfielder. But the Braves do have options because they have a surplus of talent they can negotiate with, especially starting pitchers. Hang on, it's going to be an interesting winter before spring training rolls around.
Posted by Sports Dawg at 10:38 AM