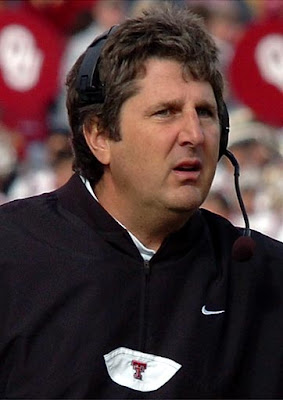 Texas Tech has suspended head football coach Mike Leach indefinitely. He will not be allowed to coach the Red Raiders in their Alamo Bowl game January 2nd. Leach has come under fire for his treatment of receiver Adam James, who had been diagnosed as having suffered a concussion. I don't know the nitty, gritty details of this situation, and the ones who probably do aren't talking. But there doesn't seem to me to be any winners coming out of this thing in the end. I can't see a university suspending a coach for a game unless these accusations have some substance to them. One is supposed to be innocent until proven guilty. Is there fire where this smoke is coming from? I would have thought that if Bob Knight could make it through his tenure at Tech without a suspension, that any other coach could skate right through. It also might be tough for James to get a break with any other coach after all this plays out. Could this entire scenario been handled in a different and better way? No answer from me on that. However, I would bet that the Texas Tech careers for both Leach and Craig might be coming to an end very soon. Whatever the outcome, a lot of damage has already been done.
Posted by Sports Dawg at 1:18 PM