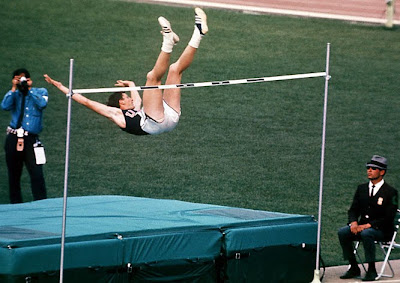 Sports Illustrated Vault had a series on athletes who revolutionized their sports. Since we're still into full-blown track and field season, I thought I would reminisce about Dick Fosbury and his "Fosbury Flop". In 1968, Fosbury won the Olympic Gold Medal in the high jump. His winning mark of 7' 4.5" was a new Olympic, as well as, United States record. His head/back first approach to the bar seemed awkward to everyone at first. However, when Fosbury continued to have extraordinary success with the technique, more and more high jumpers adapted to the flop style. Even today, his back first style is the prevailing technique for the event.