Georgia: A Quarterback Competition, Not A Controversy 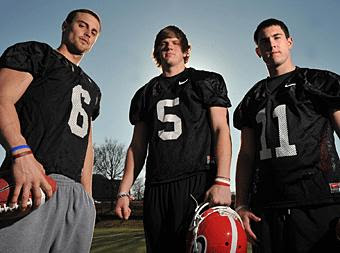 Spring practice has come and now it's gone; but the quarterback battle lingers on. That little lyric just about sums up the Georgia Bulldogs' three way quarterback competition. None of the participants stepped up and claimed the job outright as the starting quarterback. The one irony surfacing out of Athens might just be that the signal caller who actually was the most impressive this spring, cannot be the Dawgs opening game quarterback. I'm referring to Zach Mettenberger (center), who will be suspended for at least one game due to an underage drinking charge. From everything I've heard and read, he possibly has the chance to emerge as the early number one depth wise. However, Aaron Murray (right), as well as veteran Logan Gray, have had their good days this spring also. Head coach Mark Richt and offensive coordinator Mike Bobo expect to have a quarterback depth chart within a week. However, they both admit that in this case the early pecking order is only window dressing and that the competition will be ongoing throughout the summer. I have the feeling we will see more than one earn significant playing time during the entire season. I don't think they'll alternate or rotate specifically, but I don't see one player dominating either. The next four months will prove to be very interesting around UGA football. One great point worth noting is that with a veteran offensive line and two proven running backs, the quarterback won't be put into as many situations where he has to shoulder the bulk of the offensive production. That has not been the case for the last several years.