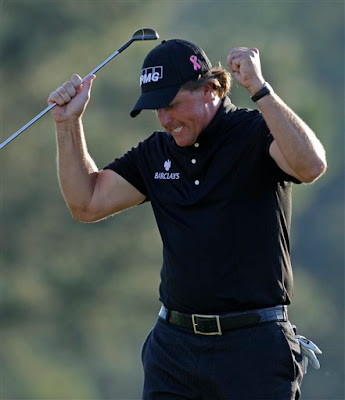 To follow a round with Phil Mickelson at the helm of a golf club is to be on a roller coaster of emotions for several hours. He will astonish you with his ability to create and execute tremendous golf shots, then he will turn around and frustrate and infuriate you with the quagmires he gets himself into with his wreckless style of play. This was the journey he led us on yesterday, one Harrison Ford would have been proud to claim. All he had to do was exchange a fedora for a golf cap. Yesterday on the back nine at Augusta, Mickelson makes a fantastic birdie at the 12th to snatch a huge portion of the Masters momentum. Then on the 13th tee, he blasts a driver through the fairway into the tall Georgia pines. Why hit the driver you might have wondered, as did I? Because it's Phil Mickelson. He knows no other way to play. Just always attack and don't look back. But he follows up this bogus tee box mistake with perhaps the shot of his entire career. His ball is on the pine straw, behind a tree, with only a four foot opening and 187 yards from the front of the green over water (this sounds like one of those old Larry Bird trick shot commercials!). So he'll lay up of course? Not Mickelson. He hits it stiff to within three feet of the cup. He missed the eagle put, which only helped keep the decibel level down somewhat over the course, but made birdie. And the rest is history. He triumphs, and the rest of us are just as worn out as he is. But it sure was a lot of fun.
Posted by Sports Dawg at 9:46 AM