Jason Heyward: The Kids Got Game 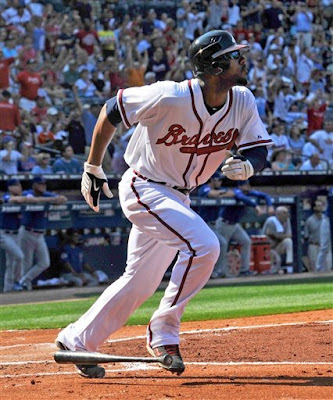 Get used to it Atlanta. This kid is for real. I know, I know, one game does not a season make, much less a career. But Jason Heyward is special. Not just because he hit a towering, three-run homer in his first at bat in the major leagues. Not because he transformed a normally sedate Turner Field into a reverberating jam box. Not because of all the hype that preceded him taking his place as the starting right fielder for the Braves on Opening Day. And not because he wrote a new script for some future "Dreamy Braves Days" print with a little kid imagining his own first day in an Atlanta Braves uniform. Not just because any of that. Because of all of that, plus the fact that Heyward has more talent than an American Idol tryout. If Jeff Francoeur was once labeled the "Natural", then this guy has to be deemed the "Super-Natural". He has all the tools, as they say, as well a good 'head on his shoulders'. And that might turn out to be his most valuable commodity because playing consistently well at the major league level is not easy. How well he is able to work through slumps will be another indication of what this kid is made of. I'm believing Heyward will be able to handle it all. He'll handle it well, and for a long time. It's gonna be a lot of fun watching this kid play baseball.
Posted by Sports Dawg at 9:06 PM