Phil Mickelson: Finally the Talk of the Town 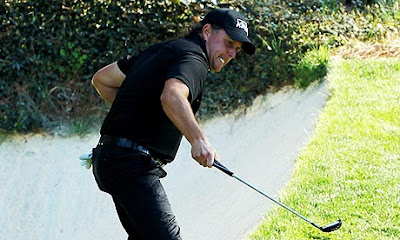 Everyone should have been talking about Phil Mickelson the entire week of the Masters. However, he didn't capture the attention of the media until his birdie heroics on Saturday. His back nine barrage that day forced the media to shift their futile attention from Tiger Woods to Mickelson. The media desperately adored the man who cheated on his wife, but they got the man who adored his wife. They also got a storybook ending to a week that was wrongly fixated on one golfer rather than on the tournament itself. Fred Couples got ignored, even while leading after Thursday. Lee Westwood got ignored while posting great numbers. K.J. Choi got ignored even though he played head to head and stroke for stroke with Woods. But in the end, it all worked out. All of the golfers above were finally noticed for their terrific play as they should have been all along. And the "Knight in Shining Armour" comes through in the end to save the day, the week, and the tournament. Thanks Phil Mickelson, you should have been the talk of the town all week. For a heck of a lot of reasons.
Posted by Sports Dawg at 9:20 AM