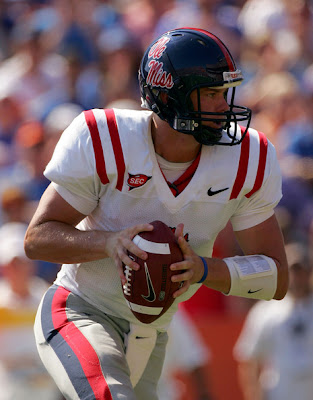 2009 was not a good season for Ole Miss quarterback Jevon Snead. His 20 touchdowns were equaled by his 20 interceptions. He completed only 54 percent of his passes. With those statistics in hand, why skip your senior campaign after such a dismal year on the field? There were a lot of pundits out there who wondered that very thing, but I doubt that any of them thought Snead would go through the entire NFL Draft completely undrafted. My gosh, even Tennessee's Jonathan Crompton was selected in the fifth round by San Diego. A total of 13 quarterbacks were taken in the draft, apparently not one of those teams believed enough in Snead to expend even a late, late round selection on him. At least Tampa Bay has offered him a free agent contract. Who knows, he might recover some of the luster he showed in 2008 and make the Bucs roster, but as Tom Cruise said in Top Gun, he "crashed and burned" in the draft. I think he should have remained a Rebel one more year. What the heck, his stock couldn't go any lower.
Posted by Sports Dawg at 11:52 AM