Tim Tebow: What A Sales Job 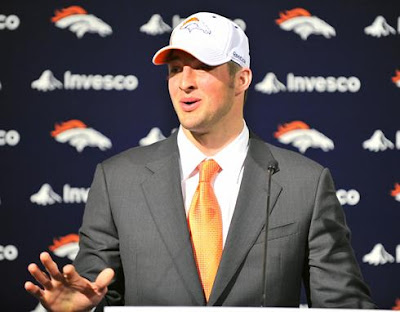 Tim Tebow was drafted in the first round of the NFL draft by the Denver Broncos. He was taken before quarterbacks Jimmy Clausen and Colt McCoy, both who were presumed to be selected before him. Tebow was drafted high and early even though there are tons of questions regarding his ability to be a productive professional quarterback. He was drafted in the first round because Tim Tebow did a magnificent job of selling himself to the Denver brass. His talent as a quarterback did not get him drafted in the first round, but the qualities of his character most certainly did. He sold himself big time. He said he would do exactly what his coaches told him to do. He promised he would outwork everyone in the Broncos' organization, being the first to arrive and the last to leave. He stated how he loves a challenge, especially when people say he can't do something. It will be interesting to see how Tebow backs up his talk with action in the National Football League. And to tell you the truth, I wouldn't bet against the guy.