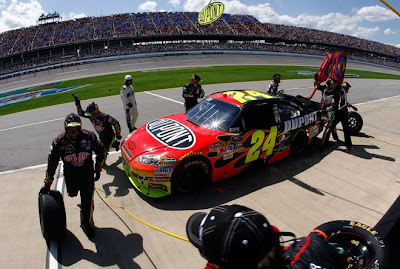 Jeff Gordon and Jimmie Johnson drive for the same car owner. In the world of NASCAR, that makes them teammates. To compound and confuse the situation, they have had 'negative' close encounters with each other for two weeks in a row now. One week ago it was because Gordon was racing Johnson "too hard'. Yesterday at Talladega, Johnson caused Gordon to wreck. Jimmie did admit to just that, but said his intentions were to pull down in front of Jeff so that they could work together. You do realize that now in NASCAR, you have to have a partner to successfully maneuver yourself around all the tri-ovals these days. This sounds more like Dancing With The Stars than it does automobile racing. These are all some of the many things wrong with NASCAR in my opinion: too many teammates, too much crying about competitors driving to close or racing too hard, and too many partnerships. Gimme a break. The NASCAR governing body is too controlling, and the drivers are too spoiled. Gordon and Johnson will hug and make up. Car owner Rick Hendrick will see to that. But the best thing that could happen to the sport is for a few intense rivalries to break out. There's way too much crying in NASCAR. By everyone.