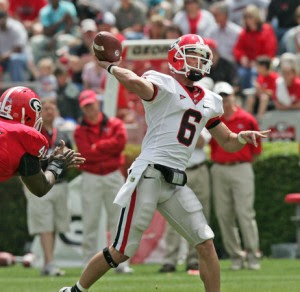 Georgia's back-up quarterback Logan Gray met with head coach Mark Richt yesterday regarding the junior signal callers future. It appears that Gray is considering the possibility of transferring to another school for his two final years of eligibility. Gray, a Columbia, Missouri native, probably feels lost on the depth chart once again. He had previously considered a change of position to obtain more playing time, but with the abrupt exodus of former QB Zach Mettenberger, that change of position isn't very realistic. If indeed Gray does leave the Bulldogs, redshirt freshman Aaron Murray would be the only scholarship quarterback on campus until freshman Hutson Mason arrives in a month from now. I said all last year that offensive coordinator Mike Bobo should have found a way to get Gray more playing time. There were a ton of opportunities to get the kid on the field when former QB Joe Cox faltered. If Gray had received more meaningful minutes in 2009, he might not be considering this move at this stage. But of course that is a moot point now. If Logan Gray wants to play another position at Georgia, give him that opportunity. If he wants to work harder in hopes of playing more at the quarterback position, then tell him to make that commitment. If he wants to leave UGA, wish him well as he walks out the door. The only Dawgs we need in Athens are the ones who truly want to be there.