Advantage to Both "Bulldogs" at CWS 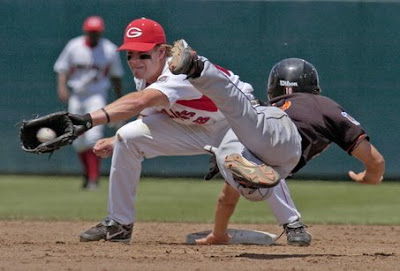 Both the Fresno State Bulldogs and the Georgia Bulldogs sit atop their respective CWS brackets with unblemished 2-0 records. Considering that Florida State and Rice have already departed the tournament, the other four teams have essentially spotted both Bulldogs a game up advantage. The next best news in all of this for the two leaders is that by the time they play again, two of the higher seeded teams will also have exited the field. On Fresno's side, either LSU or North Carolina will be sent packing after they play in an elimination game, and on UGA's side the same holds true for Stanford or Miami. These are four of the highest seeded teams on the brink of elimination. That certainly does make the two 'Dogs combined four wins seem huge, as well they are. The two winners from the loser's bracket will have to defeat Georgia and Fresno State twice to advance to the championship game. It can happen, but you gotta know any of those teams would love to be undefeated at this point themselves. It is definitely 'Advantage Bulldogs'! I realize that all these teams have outstanding pitching, but one thing I keep thinking about on UGA's behalf is that they haven't had one of their double digit run explosion games. They are capable of that, just ask N.C. State. I believe we just might see one of those games from them in Omaha. They've come up with the clutch hits when they've had to have them, but they haven't gone on one of those 'rampages' yet. The bullpen has been sound, as has the defense. I know this is really going to sound like a 'homer' remark, but Georgia has overcome a couple of bad calls too. O.K, O.K., I know, everyone playing in the College World Series has suffered through bad calls. I just had to get that in there in defense of my Dawgs! Nevertheless, "Perno's Pups" are in a great position to reach the championship game. Being the veteran club they are I don't see them departing easily. It just might be the year of the "Oval G 'Dawgs"!