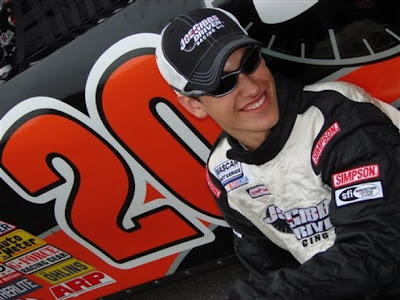 Joey Logano won the Meijer 300 Saturday night at Kentucky Speedway. At 18 years of age, he became the youngest winner in Nationwide Series history. Logano, who drives for Joe Gibbs Racing, won the event from the pole. In his three Nationwide starts he has two poles and one victory. In his first series start at Dover, he recorded a sixth place finish. After having to wait until he turned 18 to compete in one of Nascar's three national divisions, the buildup and anticipation of his arrival was unprecedented. It is expected that he will make a few starts in Sprint Cup Series races this year, and compete full time in Sprint Cup in 2009. Nextel Cup driver Mark Martin calls Logano the "real deal", and says he already has more talent than some drivers he races against now. Martin went on to say "I don't think Nascar has ever seen anything like Joey Logano". He's been racing since before he was 7 years old. He signed his professional contract with JGR at the tender age of 15, after having been tabbed a can't miss prodigy that early. With his immense talent, focus and determination Logano just might be a name to remember. His affiliation with Joe Gibbs racing won't hurt either.