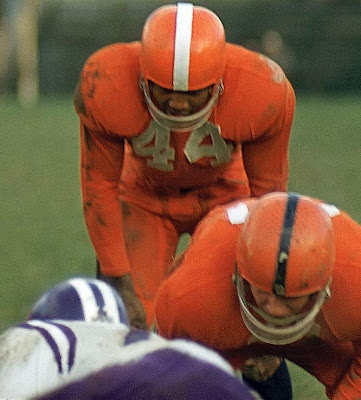 Jim Brown has been named by Sports Illustrated as the greatest player to ever wear the number 44. He of course wore the number at Syracuse University from 1954 to 1956 as an All-American running back. In his final regular season game against Colgate, Brown rushed for 197 yards, scored six touchdowns, and kicked seven extra points for 43 points. At Syracuse he played not only football but also earned letters in basketball, lacrosse, and track. It is interesting to note that he is argued to be the best lacrosse player of all time. There have been two other famous All-American 44's at Syracuse, Ernie Davis and Floyd Little. Since 1954, eleven players have worn the number 44 at the school. I applaud SU for not having retired the number. Everyone knows what that number stands for at Syracuse, and I think its legacy is enhanced by the fact that it is still open to wear. When schools retire numbers, they are robbing other athletes of the opportunity to wear a number that is special to them as well. Just recognize great players AND the number in some special way, like a ring of honor or banner, etc. The player is enshrined so to speak, but the number lives on to play another day. That seems like a win-win situation to me. Even go back an 'unretire' numbers (wow, talk about controversy!). I would like to see guys at Georgia have the chance to wear the number 34 again, and you know who wore that one (Herschel was also named by SI as the greatest to wear 34). At UGA, 47 (David Pollack) hasn't been retired, so EVERY other number should be available to gridiron Dawgs. And any number at any school for that matter. After all, you never know who the next great tailback might be at Syracuse University. And he just might be wearing the famous 44!