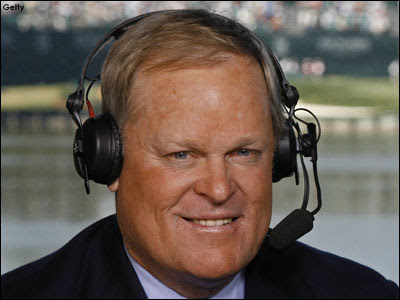 Johnny Miller has always been one to say what others only dare to think. He brings no bashfulness to the booth. What comes up, comes out. Just as at the U.S. Open this past week when he said Rocco Mediate looked like the guy who cleans Tiger Woods pool. This week he apologized for those remarks, saying he did not mean to offend anyone. The message I thought he was trying to convey with the flippant remark was that Mediate looked as though he should be working for Woods instead of playing a round of golf with him. It seemed like a shot at the pool boy and the golfer. But I'll admit, it seemed more aggressive than it did stereotypical. Just Miller being Miller I suppose. Once he thought the quality of golf was so poor a particular tournament that he quipped: "If I had been in the gallery, I'd have gone home". Maybe Miller's creed is that if you think it, you might as well say it. He seems to be pretty good at that, and he probably doesn't care what you or I think. He will issue an apology, but he does it knowing he would say the same thing again. And I know he would too.