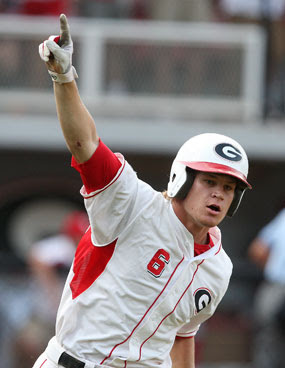 Gordon Beckham and the number 8 ranked Georgia Bulldogs will meet the number 1 ranked Miami Hurricanes in the first round of the College World Series Saturday night. The Hurricanes are headed to Omaha on a roll, having won 19 of their last 23 games. This will be the 23rd CWS appearance for the 'Canes. The Dawgs are also on a streak of their own, having scored 90 runs in their last 8 games. As they head to the CWS for the 7th time, they have no fear of Miami and its storied baseball program. They realize that every team in Omaha is there because they deserve to be there. So regardless of your draw, you're going to be facing a very good team. The Bulldogs of Coach David Perno are a veteran squad who believes it is peaking at the right time. They should match up well and hold their own against 'the best of the best' at Rosenblatt Stadium as the Series gets underway this weekend. Try to catch a few innings here and there of college baseball at its finest at the College World Series in Omaha, Nebraska.