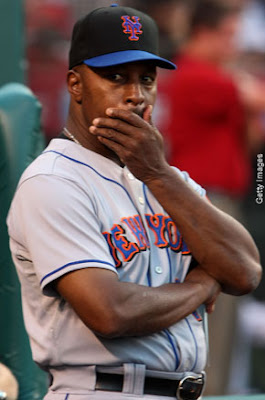 Now, as a Braves fan, you can imagine how much concern I have had about all the rumors surrounding Willie Randolph's lack of job security with the Mets. I figured keep him, fire him, ho hum, whatever will be will be. But wait a minute. You let the guy fly to the west coast to open a series with the Angels, then fire him when he returns to the team hotel AFTER a win? At midnight? I'll bet the hard-hearted Steinbrenners across town were even impressed by that move. If you let him go after a win, you must have known before hand you were gonna put the guy in the road. Why even make him board the plane? I wonder if the team offered to fly the poor guy back to New York? I suppose that the die was cast less than a week ago when he got the public support of the Mets front office. Doesn't that always spell F-I-R-E? I'm not arguing the validity of the firing because I don't have an opinion on whether it was the right thing to do for the team or not (see ho-hum above). I'm merely saying that was one heck of a way to do it. I do realize it was face to face, and that it was before it leaked to the press, but couldn't you have done it in NY? Before dark? Before the long flight? Before the team's third win in four games? At least one 'before' is right: You did it before the Braves kick your keisters again!