Braves: A Look at "Half-Way" 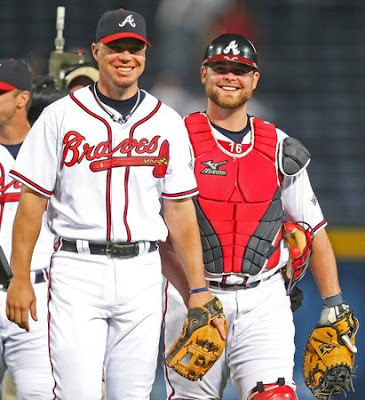 The Atlanta Braves have reached the half-way point of the 2008 MLB season. Their record stands at 40-43, 4 games behind the division leading Philadelphia Phillies. Despite being 3 games below the .500 mark, they remain in striking distance of the Phils. This seems almost remarkable to me because I have seen them actually give away 5 games they should have (not could have) won, they have set a record for 1-run road losses, and they have had more than their share of injuries. Add all of that to the fact that Jeff Francoeur has been terrible, Mark Teixeira is just now getting hot, and we have had to rely on young "arms" you hadn't even heard of before the season. Now that 4 game deficit looks really good, at least considering how bad it could be at this point. Mark Kotsay is set to return off of the DL, and even though Chipper is set to go on it, we should have our regular position players ready for the stretch run after the All-Star break. If Kelly Johnson can get consistently stable defensively at 2nd, the infield of Jones, Yunel Escober, Johnson and Teixeira is solid all around. It would be nice to think one guy would step up and claim the left field post, but we might just be stuck with Bobby's platoon system forever out there. After all, its been that way for several years now so I don't see that changing unless Matt Diaz comes back red hot. I'm all in favor of sitting Francoeur more often until he comes out of this hitting slump he's mired in. In fact, a 2 week dose of AAA Richmond might not be such a bad prescription. But since I've berated Jeff, he'll probably snap out of it and go into a hitting frenzy. The return of Kotsay in center field is going to be huge. He's a veteran who knows how to play the game. His solid and consistent play will be crucial to our success. We are as good behind the plate as anyone else in the league. Brian McCann is the real deal, and he will just continue to get better and better. Our starting pitching has been much better than we could have expected with both Smoltz and Glavine missing so many turns in the rotation. Of course Smoltzy is out for the year, and you aren't going to get much more that 5 innings per start out of Glavine if he even pitches again. Of course you know your chances are better at winning the lottery than they are of ever seeing Mike Hampton chunk the rock again. So we have Tim Hudson, Jo-Jo Reyes, Jair Jurrjens, Jorge Campillo and Charlie Morton as the rotation. Lately, this group has been better than the support they've received from the offense. We've actually wasted several quality starts because our bats went dead. The depleted bullpen will scare you to death, but they have had some good outings themselves. We will have to settle on the right hitter for the lead off spot; a riddle Cox and staff haven't been able to solve yet. Kelly Johnson isn't the guy, and Escober seems to function better in the number 2 slot. That just about only leaves that left field group to pick from. Good luck to us there. Chipper must get healthy and stay healthy. He's the straw that stirs the drink. When he is in the line-up, he picks everyone else up, not to mention the guy can flat out play. He isn't bad in the clutch either. We are finished with inter-league play, and the number of games within our division will increase. We have to win series; not necessarily sweep them but win them in order to gain ground. The law of averages says we have to win more 1-run road games in the second half, and I would hope the injury bug will ease up on the Braves to some degree. It would be interesting to see how good a healthy Atlanta club could be. I'm not sure we're the best team in the East, but none of the others have taken it by storm either. I believe the Phillies are the team to beat, and we begin a 3 game set with them July 1st at Turner Field. If we win this series, then the Phillies, Mets, and Marlins all have to take us very seriously again. Since they have let us hang around this long, we might as well make 'em pay for it! Yes I know. I'm the one who made the post back on June 11th that the Braves were dead. What can I say? "Hope springs eternal!" I'm reminded of former Braves announcer Milo Hamilton saying often: "We gotta go get 'em Braves!"