Hey Plaxico, Come Out and Play! 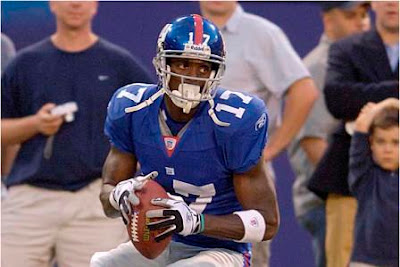 Plaxico Burress isn't happy with the contract he signed, so he isn't going to practice with the team until they renegotiate with him. Professional athletes pull this stunt all the time, and most of the time owners give in to them. I say sue 'em. You signed it, you play it out. Why didn't you have enough guts to sign a one year deal so you would have some leverage at this point. No guarantees, huh? You might have sustained a career threatening injury, huh? Oh yea, let the owners eat the contracts. I say sue 'em and sit'em. The game is bigger than they are. They need the game more than the game needs them. Sit 'em, sue'em, and forget 'em! Burress has three years remaining on his six year, $25 million deal with the Giants. He says he is unhappy with the $3.25 million he is to be paid this year, as well as with the $3.5 mil in 2009, and the 3.75 scheduled for 2010. If he chooses not to participate and not to practice, don't let him play. Don't negotiate a trade for him. Run him out of the league. Sit, sue and forget. See how he likes $4.00 a gallon gasoline without those $3 million smacks in his old checking account. In the real world we are concerned about inflation and recession, and this bozo wants to renege on a $25 million deal HE SIGNED in the first place. We are suppose to care? Give me a break. Go find another wide receiver. They're out there. Quit pampering these half-grown brats. You don't like the next guy making more than you? Well sign 'em one year at a time, big boy. If not, the owner has the leverage. He took all the risks. He holds all the cards. But Plaxico my man, this is your lucky day because the owners have more money than they have sense. They don't realize they actually do hold all the cards. So relax, Plax. They'll give you what you want. Not me though, I'd sit ya, sue ya, and forget ya! And the sports world would forget you too. As quick as you can say Plaxico!