A "Tip of the Cap" For Rocco Mediate 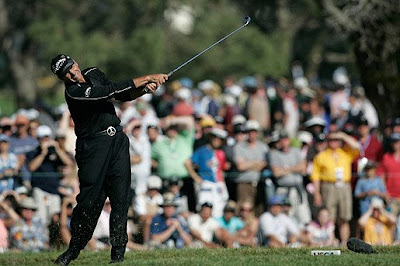 No, Rocco Mediate is not the 2008 U.S. Open Champion. And really, none of us expected him to be. I checked out Monday's playoff in the late afternoon to see how many strokes he was down. (I'm sorry Rocco, no faith on my part). At that time he was tied for the lead. I wanted him to do well, but I was afraid for him. I wanted him to win, but I knew the odds did not favor that. I wanted him to win because he was such an immense under dog. I wanted him to win because he's been around and has paid his dues. I wanted him to win because I wanted the domination of the sport to at least be side-tracked for a big weekend. I'm not too hyped on 'moral victories", and I would not insult Mediate by suggesting this was at least that for him. It was bigger than that. He brought his "A" game and played his heart out. Mickelson didn't do that. Not even close. And Rocco said Monday night, "I threw everything I had at him ." That you did my man!
You kept it close, and interesting, and thrilling, and fun. You competed...man did you ever compete. You made all of us under dogs proud. You said in an interview after Saturday's round that you probably wouldn't have the opportunity to be in this position again. Here's hoping that you do, and that when you do you pull out the win. At least we know you'll throw everything you have at 'em!
Posted by Sports Dawg at 9:19 AM