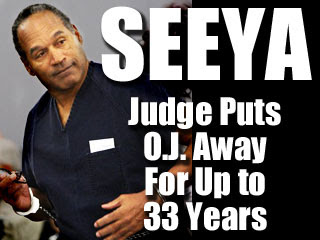 Judge Jackie Glass did today in Nevada what college and professional football defenses were not able to do very often, and that is stop O.J. Simpson. After imposing such a varied series of concurrent and consecutive sentences that even lawyers had difficulty breaking it down, it has finally been deduced that the earliest Mr. Simpson could be released from jail would be after his 70th birthday. He is 61 years old now. Judge Glass, known for a no-nonsense approach, as well as for dishing out tough sentences, was strictly business today. She began the day by denying Simpson the privilege of wearing street clothes to the sentencing, and ended it by denying him bond pending an appeal. These two denials meant that O.J. Simpson exited the courtroom in shackles and a blue jumpsuit and headed directly to prison. Do not pass 'GO', do not collect $200. Simpson had been convicted on October 3rd of 12 criminal charges, including kidnapping and armed robbery.